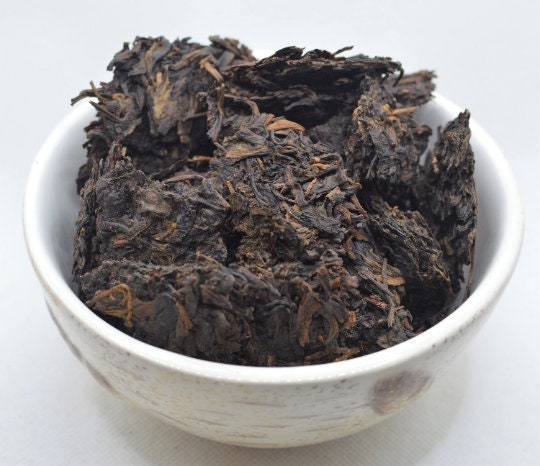 This here is me sharing a portion of one of the more crazy things I'm come across.
Story time! In 2013 I befriended someone in Malaysia who does a decent amount of stuff with and around tea. Fast forward until 2019, I'm offered the ability to buy a shrink wrapped 1989 layin (bluemark) without even sampling it and I decided I'd go for it. Didn't really speak of it or anything because I was once told to keep some stuff to myself. Well, after playing around with it so much I've come to my own belief that this was shrink wrapped for the majority of it's life and possibly along with the material/processing it is just a brutal tea. The energy goes down heavy but it sits on the tongue very strong like a sandpaper just went across. While that doesn't sound pleasing, it's actually nice because the taste is impossible to shake. The brew comes out copper and reminds me of a natural HK stored tea in many aspects. This isn't something that'll taste as aged as other pushed things in Taiwan even 15 years after this one was which is tricky... it's not for everyone, but for those who are willing to take time to sit down and let it kick your butt (being all of your body) I think they'll enjoy this as it makes you almost scratch your head.

Each sample is right above 7g at a price that's silly.